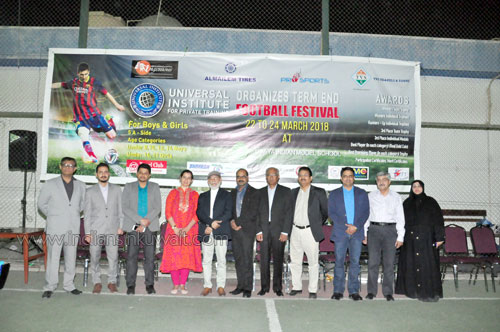 This was a break time for school children from the routine of hard working school days as examination got over and kids were relaxing.

This was the best time when Universal Institute gave them a chance to exhibit their football skills and provided a time to them to refresh their energy.

Forty teams from different football clubs and Indian Schools participated in this BIG Event. The boys Teams that participated were under 8, 10,12 and 14 age categories. There were girls team (Under 14 and under 19 age categories)too who participated with lot of enthusiasm. The event was inaugurated by Dr. Anis Ahmad the Director, Salmiya Indian Model School. Mrs. Geeta Redu was the Event Manager, Mr. Manpreet and Dr. Shyam were the officials to refer the matches.

Real Gold Coin for best players:
Best players in each category were given real GOLD COINS (I gram each) and this happened for the first time. Those who deserved these real gold coins are:
Saif Bassem,Dara Shaheed,Ameen Habib,Naveed,Faye Cardozo and Heen

The Champions in their Categories are:
(Boys)Chelsea under 8 , Chelsea under 10, Franco Blue under12 and Sporty Asia under 14
(Girls) Franco under 14 and SIMS under 19

Mrs. Syeda Fathima conducted the prize distribution ceremony and Mrs. Geeta Redu the event manager presented the vote of thanks to all the sponsors without whom such a wonderful event would not have been possible.

It was for sure a memorable event for the students as they got a wonderful and fruitful time just before they return to schools for the new academic year 2018-19. It was also proposed that The Term End Football Festival will be conducted every year around the same Time.